I'm so happy you're here! Welcome to my travel blog. Here you'll find my whole life in little photo squares and neatly crafted blurbs, but don't be fooled, it's a lot messier than this.
​
From seeing the Eiffel Tower at sunrise to almost getting kidnapped in Prague, you'll find it all. I've visited ten countries in the last year! If you're looking for travel inspiration, you've come to the right place.

As Americans when you think of Danish pastries, what comes to mind? Maybe cherry filling, cream cheese, and flakey dough? In the states we are used to eating “Danishes,” but the original Danish pastry, from Denmark, is a bit different. It is called a spandauer.

I put my honeymoon body on the line for this post! There is not one pastry that I did not try. It just would not be fair to review these tasty sweets without trying every single one. So, you are welcome! 😉 But truly, there is nothing like waking up early and heading down to our local bakery, to get warm treats that come straight from the oven.

I have traveled all over Europe, and I have to say that Denmark has some of the best of the best. When traveling to Denmark, you have to try at least three of my top ten items. All of these gorgeous delicacies came from our local Randers bakeries. And I have listed them in order, starting with my favorite.

Rasmus and I are pictured here at our favorite local bakery, Lagkagehuset. I am with my favorite cake, Christianshavnerkage, and Rasmus has a chocolate cake wrapped in Marizpan. Lagkagehuset bakeries are all over Denmark, and are a do not miss!

The name is a mouthful, phonetically it sounds like christians-houn-cake To my surprise, this one is not actually super well-known among Danes, but for me is King. The bottom is a nut filled cake, and the top is a creamy, yogurt foam of sorts. I love it because it is not super sweet and always seems to hit the spot.

Also, another unpopular vote among Danes, the Kartoffelkage isn’t much to look at, but it is divine. I discovered this gem on accident when trying to speak with an older baker who didn’t speak English. She just threw it in my bag. It is an old Danish cake from the early 1900s made to look like a potato in the dirt. The outside is marzipan and the inside if filled with white cake and cream. Marzipan is found in many Danish treats, and I am obsessed with it!

a sweet, yellowish paste of ground almonds, sugar, and egg whites, often colored and used to make small cakes or confections or as an icing for larger cakes.

Now this cake is likely the winner for many Danes. Most of my friends here named it when asked about their favorite pastry. Its base is pie-like with marzipan and a bit of jelly. And it is topped with a light, sweet cream, chocolate and strawberries. 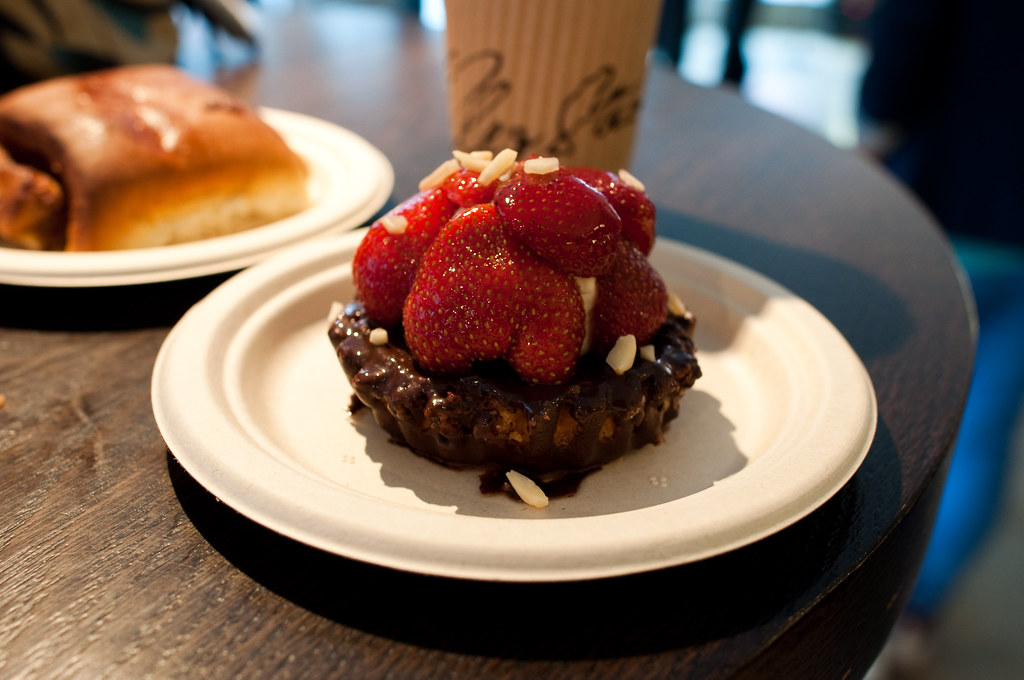 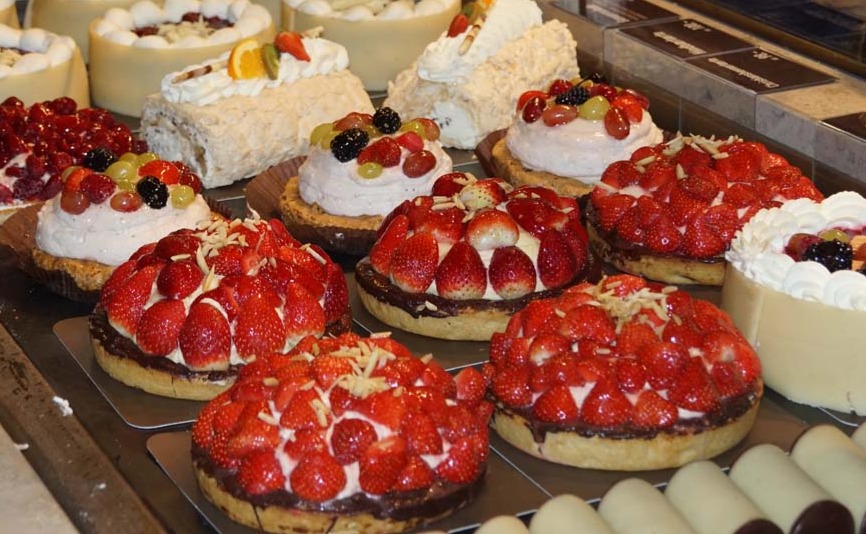 This is the pastry. The inspiration behind the globally recognized “Danish.” It is said to date as far back at 1850, and the name comes from an infamous prison in Berlin’s Spandau district which, to Danish bakers, resembled the shape of the elevated pastry. Spandauers are one of Denmark’s oldest and most cherished wienerbrød. If you try nothing else, try the iconic spandauer (but seriously, try way more than that). 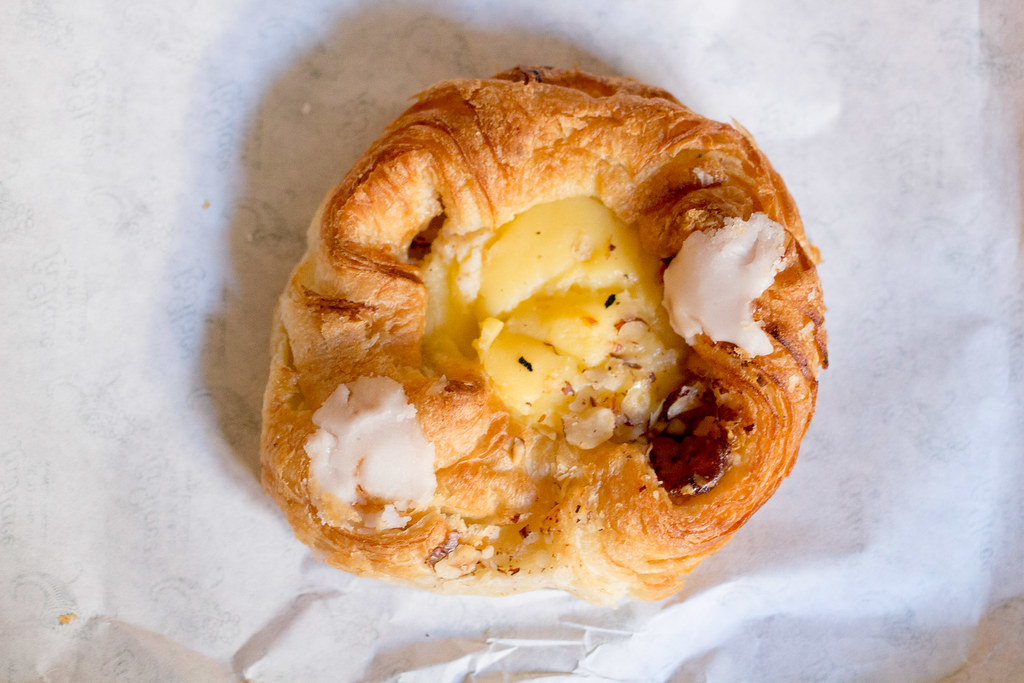 “Danes have dozens of different names for wienerbrød, each with their own characteristic shape, texture and filling. The iconic yellow custard pastry we refer to as a danish is actually called spandauer in Denmark. Snegle or "snails" are a prominent sub-group of danishes;

the kanelsnegl features cinnamon and icing rolled into a round pastry while a højkanelsnegl, a "tall cinnamon snail," is a loftier, breadier version of the kanelsnegl quite similar to a classic cinnamon bun. And for a direktørsnegl, which stands in height somewhere between a kanelsnegl and højkanelsnegl, replace the cinnamon with chocolate icing for what’s typically the most sickly-sweet wienerbrød you can find in the bakery.” - MyRecipes.Com

Not your average-everyday Cinnabon™, let me tell you! They call them cinnamon snails, which firstly, is adorable. But Denmark has truly perfected these ones. Asking a Dane whether they prefer the white frosting or chocolate frosting is almost a religious question. If you are buying for the group, your best bet it to bring some of both. I find the dough to be a bit flakier than the ones made in the US, and for the record I am definitely #teamwhite frosting.

If you love shortbread, this is your stop. It looks a bit like a Pop-tart™ , but it is so much better! It is clearly the very rich grandmother of the Pop-tart™, and tastes like it too. The buttery squares are filled with raspberry jam and topped with a gourmet sugar glaze.

Hello, whole new world! This guy really floored me in my first weeks in Scandinavia. If you go to Frellsen, they will even give you a free one with your coffee. I had never seen anything like this before. Imagine your favorite hollow chocolate Easter bunny, but filled with a creamy, cool whip. The also offer a variety of toppings, like coconut flakes, sprinkles, berries or nuts.

Seven weeks before Easter, Danes celebrate Fastelavn, which is the Danish carnival. Children dress up like it is Halloween, and walk door to door singing traditional Danish songs. Originally, they were given Fastelavnsboller or other candies. I have been told that today, they ask for money. Either way, these are decadent cream filled croissants that are mostly found front and center of bakery windows in mid-February through late March. 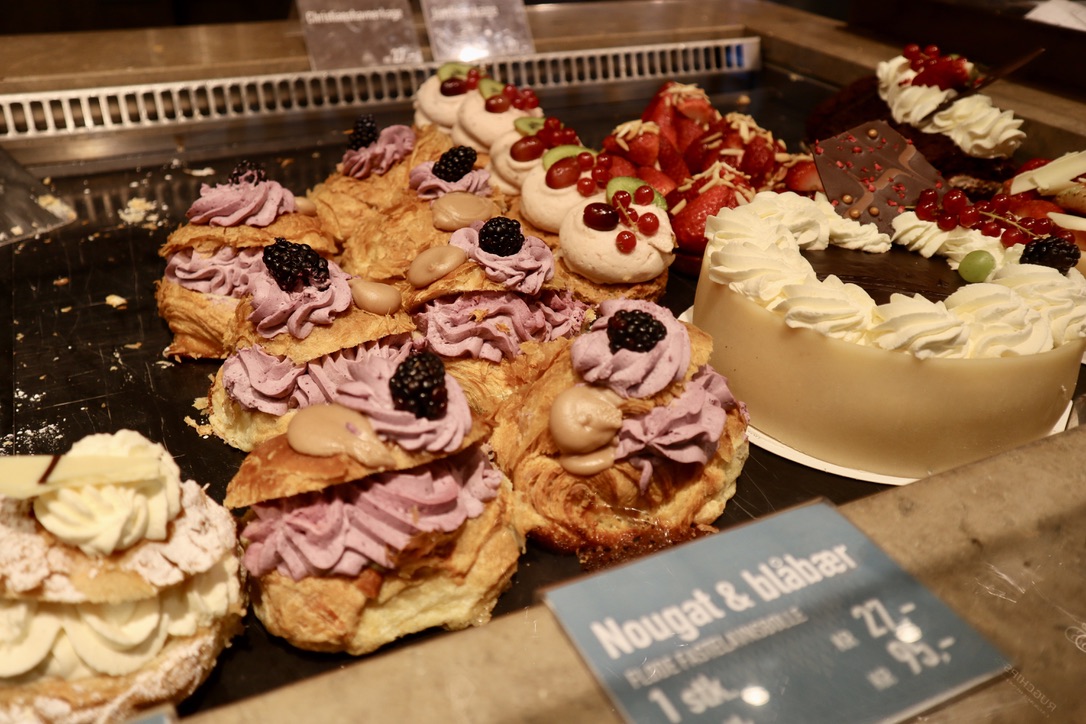 A romkugle may look like chocolate, but it is actually a soft confection of leftover pastries and cakes. The darker the rum ball, the more chocolate cake used. And they’re always kneaded with a healthy dose of rum essence. I feel like most are rolled in sprinkles. Don’t eat too many, they are more filling than you might imagine! 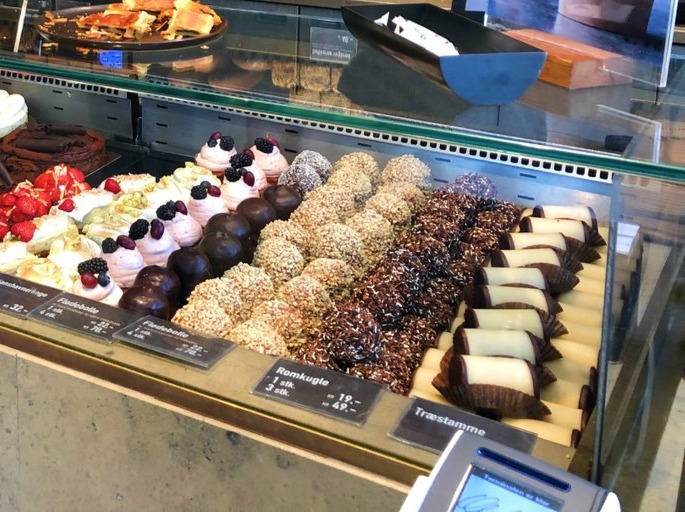 Romkugler’s cakey filling are also found inside another bakery favorite, træstammer. Their filling is then covered with marzipan and chocolate. And this is the go-to for many Danes, when they don’t want to get too fancy.

Oddly enough, this treat tastes nothing like apples, and is more like pancake balls. In the old days, apparently, there were apples included in the recipe. These are a Christmas delicacy, and can be found in almost every city center in December. They are served with raspberry, blackberry, or strawberry jam and powdered sugar. 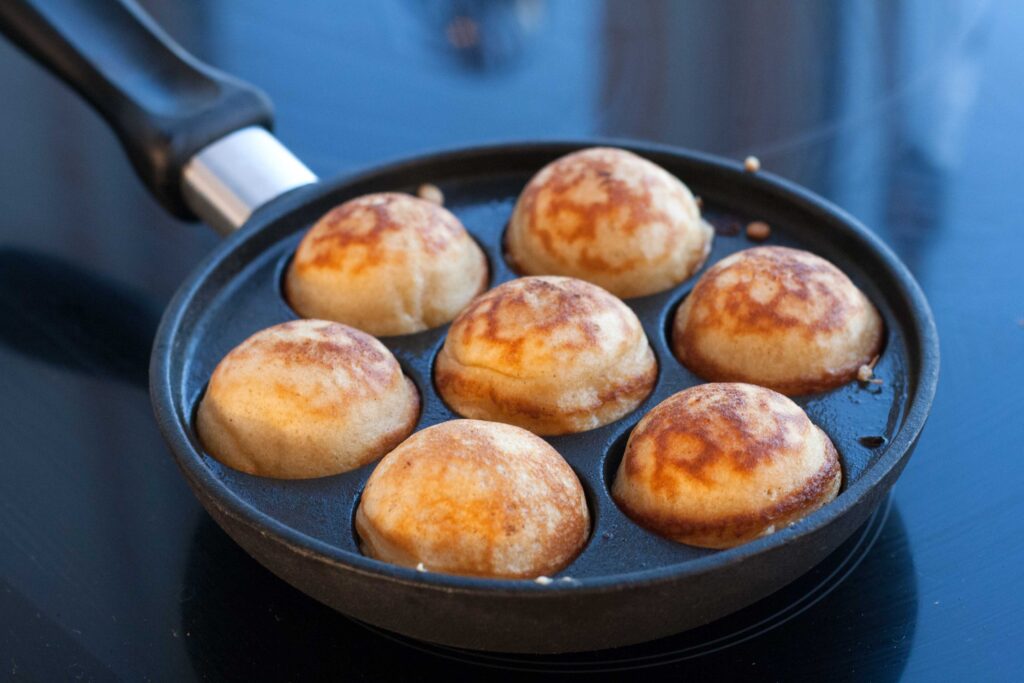 We are Headed to Randers, Denmark for Year Three!

11 Places to Visit in Denmark (That Aren't Copenhagen)

Traveling Across the World, Mid-Pandemic